The evolution of Konstruktor company from 2004 until the present day. The first jobs, the first obstacles and major successes… An interview dedicated to budding entrepreneurs with the will, knowledge, and vision!

“We got our first job at a construction fair in 2004, where we rented a small stand. And when you do one good job, you get two or three new ones, and that starts spreading like a forest fire. With a constant raising of the bar and facing ever more serious challenges, a company matures and grows. Any other way leads to stagnation.
The fledgling company had a small team of engineers and provided consulting services. Back then, as well as today, when it has hundreds of employees, the whole operation of the company is based on knowledge. Without the essential knowledge, no idea or business venture can ever be successful…”

In the interview for the “I, Entrepreneur” series, Mr. Ognjen Kisin, the Executive Director of the Konstruktor Group, spoke about his entrepreneurial beginnings in 2004, the inevitable obstacles, pushing the boundaries, and tackling ever bigger and more demanding jobs.

We recommend this video to budding entrepreneurs who have the will, knowledge, and vision! 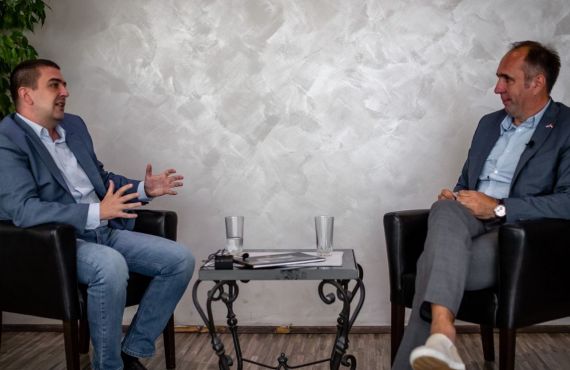 The construction of a new factory in Aleksinac has been agreed for the Canadian investor Magna Seating. The Magna Seating company is part of the Magna global group and is specialized in textile production of upholstery for the automotive industry.
Konstruktor, the general contractor, will realize the project according to the design-and-build system for the areas of 8.500 m2 and 17.000 m2 of exterior decoration.
A successful and continuous cooperation with renowned investors is a recognizable feature of the Konstruktor Group. When dealing with new clients like Canadian Magna, we customarily express satisfaction at the very beginning of cooperation. According to the set deadline, the key to the new factory will be handed over to the investor in May 2021. 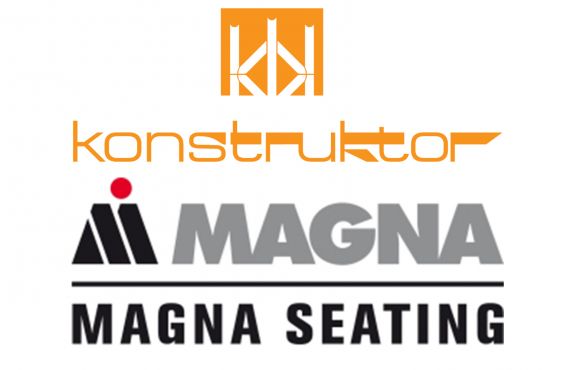 The production and installation of a 150-meter-long steel transport bridge for the Imlek company in Padinska Skela were completed within four weeks.
During the construction there was a project-technological requirement not to interrupt at any time the production process in the existing facilities, which was also successfully implemented.
Konstruktor Metal, one of the members of the Konstruktor Group, is specialized and well equipped for high quality production of steel and aluminum structures. Depending on the complexity of the steel elements production, the production capacity of Konstruktor Metal is about 500 tons a month per shift. 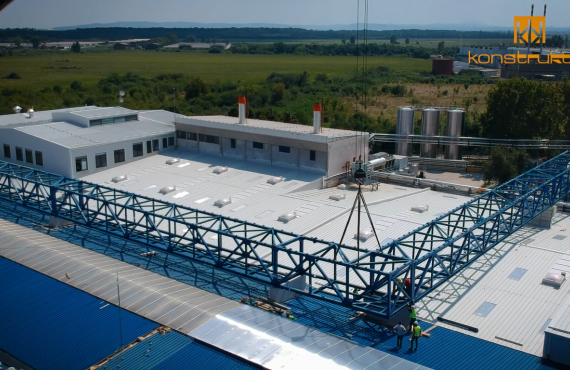 „Konstruktor Metal“ one of the member of Konstruktor Group is awarded with „AAA“ International Certificate of Creditworthiness for 2019.

In addition to modern metalworking equipment, the main strength of the company is the team of locksmith, welders and installers, led by experienced mechanical and civil engineers.
In addition to the leading company of the group "Konstruktor Konsalting", which has been carrying "AAA" credit rating excellence for years, this standard was joined by "Konstruktor Metal", which we express satisfaction. 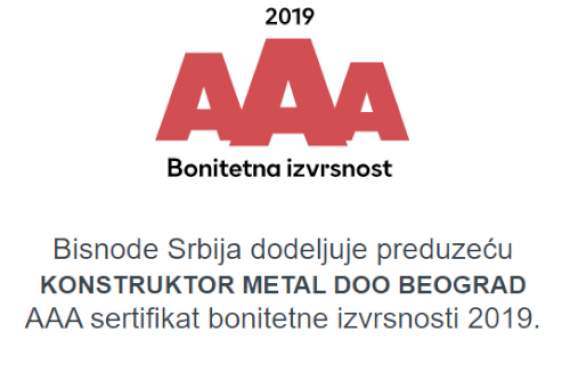 Minth Automotive Europe, a renowned investor from China, continues to expand its production capabilities in Loznica, thus leading to the second phase of building the production/storing/administration facility of 45000m2.
The first phase of the 67000m2 facility has been built at the same location according to “design and build”, “turn-key” system by Konstruktor company as a general contractor within 12 months deadline.
Due to successful cooperation and common satisfaction of both the investor and contractor, the cooperation continues with the same quality and the works on the new facility have begun.
Deadline for building this facility is 30.04.2021.
Being the general contractor, according to “turn-key”, “design and build” contract, Konstruktor works on performing all architectural-construction works, thermo-technical, hydro-technical and electrical installations, interior finishing works, as well as on all the facility ground floor arrangement works.

Visit of the official delegation to XINGYU construction site in Niš

The Prime Minister of the Republic of Serbia, Ana Brnabić, with the delegation which included Her Excellency, the Ambassador of the Republic of China, Chen Bo, the Minister of Economy Goran Knežević, and other officials, visited a big construction site XINGYU in Niš. On the site they were welcomed by the management of the investor XINGYU, as well as the management with the engineering team of the general contractor, Konstruktor company.

The Prime Minister pointed out that the growing number of Chinese companies sees Serbia as the best country for investments in Europe, so each investment of this kind will have an impact on the economic growth in the country. Also, she expressed her great satisfaction for the situation on the construction site during the state of emergency.

XINGYU construction site is 30% away from its completion, bearing in mind the state of emergency which lasted for about two months, and the building permit was obtained and the works began 3 months ago; the works are meeting the deadlines in accordance with the agreed dynamics, and thanks to great efforts of the contractor.

The size of the facility is 47,000 m2 and it its being built according to the highest quality standards with the deadline of 12 months to finish the works.

The executive director of Konstruktor Group - the general contractor of this project, Mr Ognjen Kisin, emphasized that the company made great efforts during the state of emergency, primarily in the field of work safety and health of its employees, and then in the protection of business of both the investor XINGYU and Konstruktor company.

“It was not easy. It was a challenging period. We activated the plan of business continuity and established the functions of the crisis management from the first day. Nothing stopped. Groups were formed with strict rules of conduct on the building site, in the supply chain, in liquidity, and in the communication/coordination with the business partners, customers, suppliers... Finally everything was over with not a single health consequence, and without any delays in deadlines despite the strict measures we applied. It is my great satisfaction that this construction site is visited by the delegation and that everything looks as if we have not gone through a very hard period.

I must emphasize that I am very proud of the engineering team of Konstruktor - they showed the characteristics that they have been cherishing for years: team work, knowledge, and professionalism. We are going on at the same pace.” 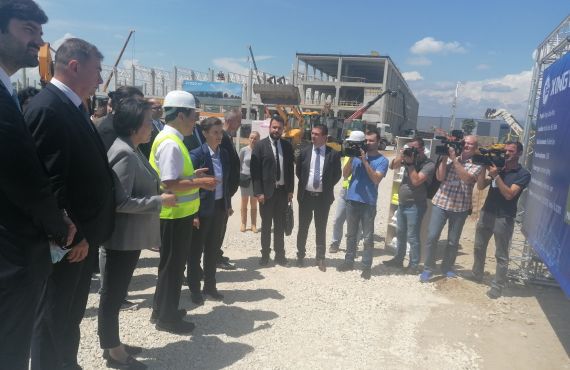 The first phase of a 67000m2 industrial complex of the MINTH AUTOMOTIVE EUROPE company in Loznica has been completed.
The facility was completed after 12 months using the design-and-build, turnkey system by Konstruktor as the general contractor.
The complex includes production, administrative, technical and storage facilities built according to the highest quality standards.
The Konstruktor company expresses satisfaction with the great cooperation with the renowned investor from China, which has its production in more than 30 locations in China, Thailand and Mexico, and supplies parts to leading car manufacturers with an 80-plus percent combined share in the global market. 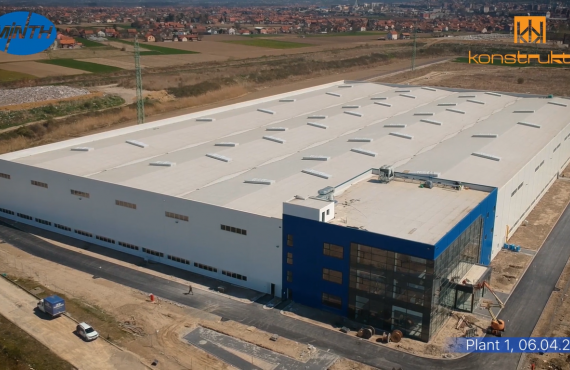 The commencement of works for the Imlek AD company

Konstruktor has been engaged to perform construction works on the IMLEK production complex in Padinska Skela, for the purpose of constructing the space for a sour-milk product positive-temperature refrigerators with a temperature regime between +4 to +8 degrees.
During the construction, the project-technological requirement is that the production process in the existing facilities should not be interrupted at any time.
The IMLEK company is implementing a project with the purpose of improving modern technology within its factory in Padinska Skela, while the Konstruktor company expresses its satisfaction with the commencement of successful cooperation with the investor IMLEK joint-stock company. 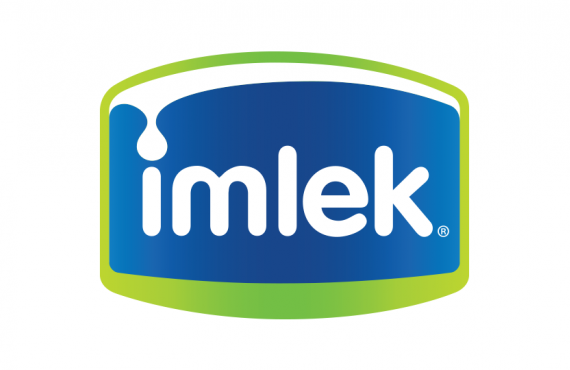 The construction of another production hall for the Termovent company from Belgrade, within their existing production plant in Kladovo, has been completed within a seven-month deadline.
As the general contractor of works on this facility, Konstruktor has performed all architectural-construction works, thermo-technical, hydro-technical and electrical installations, interior finishing works, as well as the facility ground floor arrangement works.
The primary goal of the investors was to carry out the works without stopping the production in the existing halls, while the Konstruktor company expresses satisfaction with the facility construction so that the goal of a successful domestic company such as Termovent would be achieved. 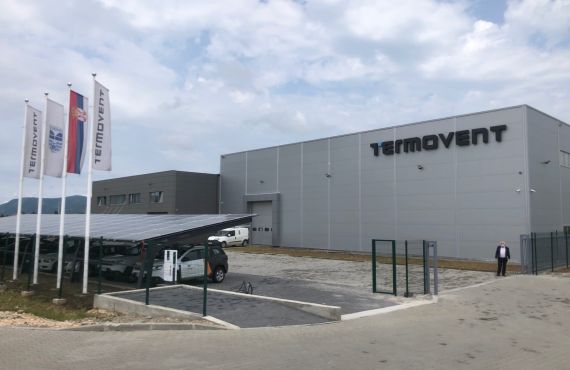 Ognjen Kisin, CEO of the Konstruktor Group: “As a team, we have justified the success of our business following the state of emergency we have been through”.

The CEO of the Konstruktor Group expressed gratitude to the employees following the state of emergency that the company’s employees went through, as well as the measures they continue to implement as long as it is necessary.

“It has been more than two months since the state of emergency was introduced and the highly challenging situation in which we found ourselves. Having established from the very beginning a crisis management and all the functions the employees implemented in the new situation, we managed to keep all the segments of the company’s business under control. We have shown a winning mentality and the ability to adapt, organize and perform our duties very quickly, even in situations where it seems impossible to do so.
With our discipline and knowledge, we have overcome, without any health consequences, the hard part that is now behind us, and we have protected our business and the business of all our clients, subcontractors and other associates.
We will continue to adhere to the prescribed measures as long as it is necessary, in order to protect both ourselves and others.
I wish to thank you for the effort you put into your work and the support you give to one other, but also to your families for the tremendous understanding they have in these difficult working conditions.
In addition to the work performed both at our office building and from home, I would especially like to emphasize the work of our team members on the field, at construction sites in Niš, Loznica, Kladovo, Belgrade, as well as the work in our production department. The team members performed their work tirelessly, in a disciplined manner and without fear.
As a company, we have justified the importance of our role in the market, and you have once again displayed the qualities this team is well-known for: professionalism, knowledge, and collegiality“. 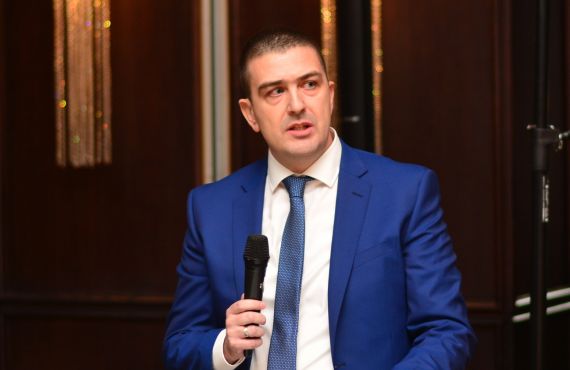