SUPPORT TO OBRENOVAC, TO THE BASKETBAL ASSOCIATION OF SERBIA AND BC “PLAYMAKER” ON ORGANISATION OF BASKET TOURNAMENT “3 ON 3”

Company Konstruktor, according to its principles of social responsible behavior of helping the youth in their normal development and direction to sport, very actively contributed maintenance of basket tournament “3 on 3” what held at the beginning of April in 2017 in Obrenovac.

Good organization, large number of participates, 14 sport teams from Serbia and region and special participation of the team of the world champions in “3 on 3” basket, led by the world’s best players Dusan Domovic Bulut, influenced that this tournament enters to the regular calendar of Basketball Association of Serbia.

Besides the status of the main sponsor of the tournament, the company Konstruktor also participated in the sport part, through their own basket team, made by engineers and managers of Konstruktor, what showed enviously fight on the tournament. Everything points that Konstruktor is in the “right team” of support to the non-profit sport manifestations, directed to children and youth, what is also one of the key directives of social responsible behavior of the company. 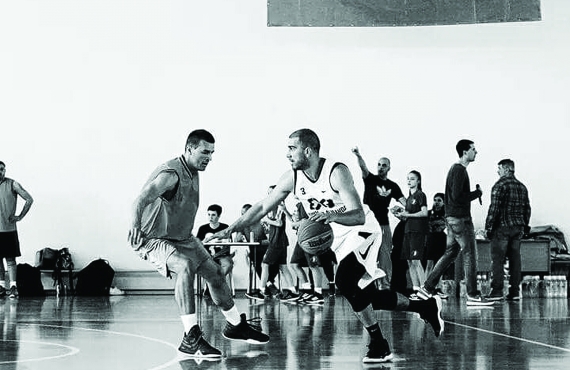 KONSTRUKTOR IN A HUMANITARIAN ACTION FOR CHILDREN SUFFERING FROM CANCER

Konstruktor was pleased to accept the participation in a humanitarian action organized by NURDOR - National Association of Parents of Children with Cancer which consists of parents, doctors, medical staff and all people of good will and company CPI Group which develops a modern residential complex Paunov Breg in Banjica. The aim of this campaign was to raise funds to be used to equip the children's oncology department of the hospital in Niš. At the humanitarian auction, there were offered works of art of children from pre-school institutions and elementary schools, who help their ill friends in this way to get better as soon as possible.

Konstruktor is particularly pleased that by its active participation and buying 3 paintings at least in a small part it contributed to the success of such an event. It is particularly important that these funds support one of the most humane activities - arranging the children's oncology department.

Excellent hypothetical event "Camp of Water Sports", as well as leadership and promotion of the Camp by Dragana Ivkovic, longtime captain of women's water polo national team and Andrije Prlainovic, one of our best water polo players are important factors that defined management of the company Konstruktor, to by using marketing and financials, help the support of this non-profitable sport organization. The most important motive for participation of company Konstruktor to this sports event, which brought together a lot of children and youth, in two shifts, in late July 2016 year are the key values that were set in "Camp of Water Sports" and to convey to young people, the camp participants such as: team work, fair play, arriving to the finish line through victories and defeats. These same values are in part of their corporate culture, implemented in the company Konstruktor in their daily struggle for an adequate position in the highly turbulent Serbian market. 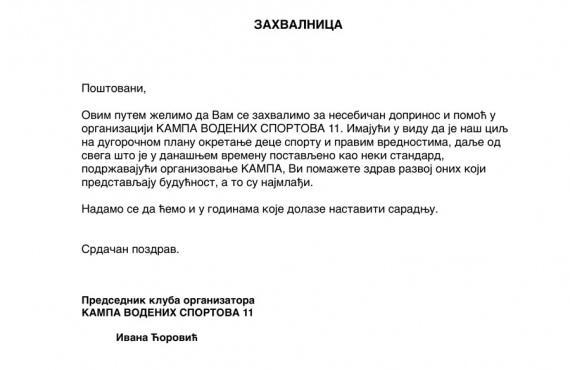 Each event in Obrenovac, Belgrade municipality which suffered the most in the huge floods two years ago, deserves special attention. When to this, we add the motive of the organizers, the basketball club BC Playmaker is tied to popularize sports in general and basketball in particular among children and youth, not lack motives for the company Konstruktor to appears as a golden sponsor of the event. Especially because the support is for unprofitable sport events, directed to children and young people is one of the key guidelines of social responsibile acts of company Konstruktor. Their active participation and full support of the basketball tournament in Obrenovac, which brought together over 20 of the top basketball teams from Serbia, the company Konstruktor has further confirmed by participation of their basketball team, composed of engineers and managers of company Konstruktor, who showed remarkable grit in the tournament. 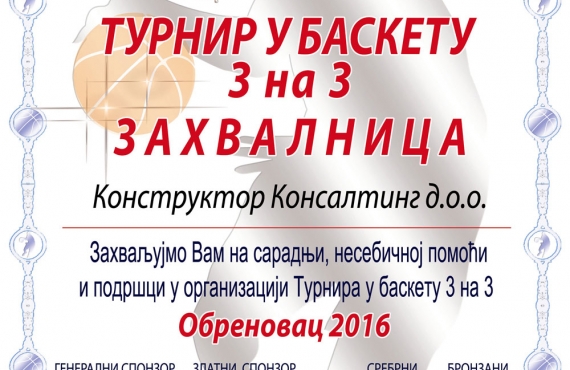 STEEL STRUCTURE IN THE TEMPLE OF ST. SAVA, AS A PROJECT OF SPECIAL SIGNIFICANCE FOR THE WIDER COMMUNITY AND THE COMPANY KONSTRUKTOR

The specifics of design, manufacturing and installation of steel structures, made for the purpose of making mosaics on the central dome of Temple of St. Sava in Belgrade and there are many of them. From that, who the orderer of the work is - Holy archbishop Synod of the Serbian Orthodox Church, over the height at which they performed works (from 42m to 58m) and the whole environment where the work was done - Temple of St. Sava, to complex technical solutions that were applied in the design and installation of steel structure with platforms etc. Overall destination of management from company Konstruktor is that not only profit is the goal of each project. Therefore, the logical imposed decision is, that on the level of project we will fully assist and aid the Serbian Orthodox Church of the total, significantly reduced cost compared to the market value of such a project. Constructor consideres that this is at least that we could do for such an important project of interest to the wider community. This project of making steel structures in the Temple of Saint Sava is classified in a unique form of social responsibile act of company Konstruktor, that we are especially proud.

Conference IACES, the International Association of Civil Engineering students in this year was an opportunity for the Faculty of Civil Engineering in Belgrade, to gathered over 80 students and professors of Civil Engineering from 12 countries. The company Konstruktor has organizationally and financially participated in this conference, which is one of the particularly important aspects of social responsibile acts of company Konstruktor, because it is based on cooperation with the young students, future engineers, the best of intellectual potential that there is in construction industry in Serbia and other countries from which our guests came. The special importance of this conference was given by prof. Srdjan Kisin, founder of the company Konstruktor and professor at the Technical Faculty in Novi Sad, which has held a special lecture on the subject of management in the design and construction works, with special emphasis on project of planning and installation of steel structures that company Konstruktor performed in the Temple of Saint Sava. 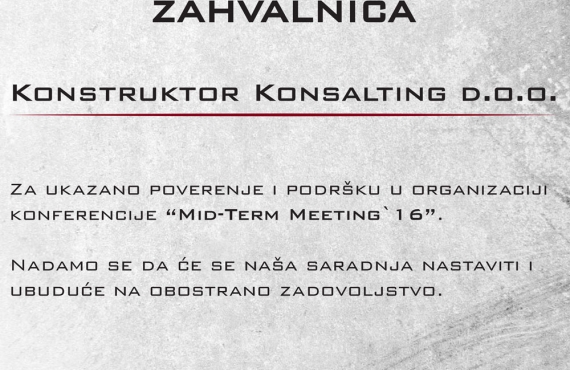 Bearing in mind the fame of Faculty of Civil Engineering in Belgrade, as well as the quality of the authors of the book, Dr. Dragan Arizanović, Dr. Pedrag Petronijevic and Dr. Dejan Beljakovic, the company Konstruktor had the pleasure to assist in covering the significant part of the costs related to the preparation and printing of textbooks "The Technology of Construction Works." 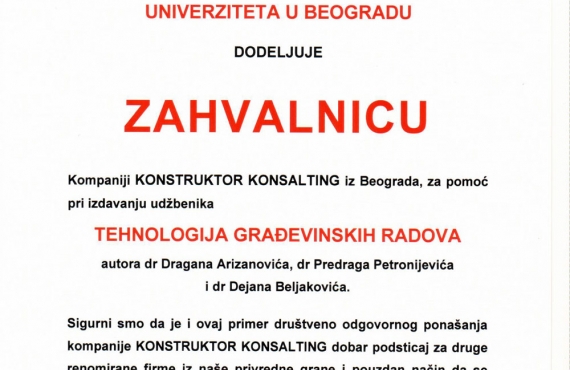